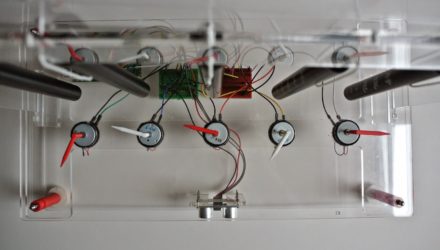 For the past few years, Simon has been working on a project entitled Music Machines. There are now over 40 of these machines and are either computer programs, installations or for live performance. This exhibition will contain some of the installation pieces which are a combination of technology and music. The centrepiece is a new work to be performed by 8 players. All players sit around a table, in front of them a series of buttons which light up and, when pressed, play a short section of music. Each player works as an individual and together produce a piece that starts slowly and quietly and builds into a mass of sound. The piece lasts for 8 minutes and it is planned that it will be performed by a variety of people throughout the day.

Other pieces by Simon include a contemporary version of a wind chime, a piece that works using an ultrasonic distance sensor, and a piece celebrating the first moon landing.

This exhibition features David Sawyer’s sanzachord which is inspired by the Kalimba, an instrument developed by Hugh Tracy from the original African Lamellaphone, examples of which are the mbira and sanza. Also included is the Lamelladrone which features acoustic amplification inspired by early gramophone speakers. The means of vibrating lamellas originates from Helmholtz’s electrically driven tuning fork.