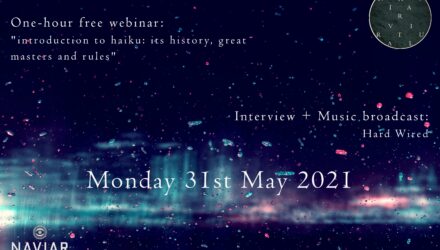 This is going to be our fifth fully digital event.

We’ll start with a free one-hour haiku webinar, followed by an inteview and performance of a member of Naviar’s community.

The interview and performance will start at 8:00 PM (BST) and can be streamed on our Youtube channel.

HardWired first started getting into music sitting up late at night watching MTV’s Party Zone way way past his young bedtime. In the small hours of the morning he was introduced to artists like Autechre, The Orb, Boards of Canada and Aphex Twin, and his love of IDM was born. He didn’t start to producing music until 1995, using Cubase and an AWE64 sound card. Tracks created back then were mainly for his own consumption, an escape from school and teenage life.
Rolling though the years HardWired has continued to produce. In 2015 HardWired released his first album “Sitting On a Path” on Bandcamp. HardWired currently live in Norfolk in England. A beautiful place in the country.

“I produce music, and sounds I want to hear. I also like to do alot of experimentation, trying to get as much as I can from synthesis and plug-ins. My music doesn’t really mean or stand for anything. Its more about exploring the emotional reactions from the music I create.”