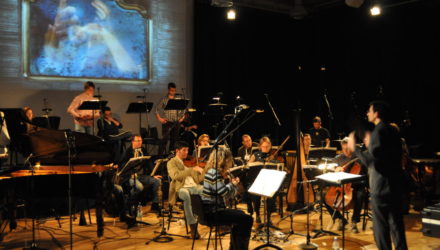 Followed by drinks at c.8.15pm

Ed Hughes founded the New Music Players in 1990 after leaving university to bring together some of the UK’s finest and most versatile musicians, with backgrounds in chamber, orchestra, contemporary, jazz, Baroque and early music performance. NMP has given numerous premieres and made CDs, DVDs and recordings for London Independent Records, Tartan Video, BFI and BBC Radio 3.

Ed’s Sinfonia for 17 instruments is a modern instrumental fantasia that will explore how the structures and sounds of polyphonic notated vocal music from 14th- 16th century England – especially Cooke, Dunstable and Gibbons – can inspire new music today. A particular interest is in the harmonies arising from some of these composers’ love of movement in thirds and sixths, but the music will also have rhythmic and polyphonic aspects that are Ed’s own. Blog here: https://edhughescomposer.blogspot.com/

Nicholas Smith OBE is the Artistic Director and Chief Conductor of the Peking Sinfonietta and the International Festival Chorus, both based in Beijing, China.