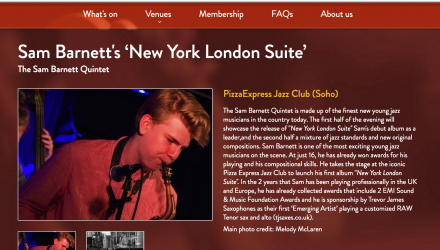 The first half of the evening will showcase the release of ‘New York-London Suite’, Sam’s debut album as a leader, and the second half a mixture o jazz standards and new original compositions.

Sam Barnett is one of he most exciting young jazz musicians on the scene. At just 16, he has already won awards for his playing and his compositional skills. He takes the stage at the iconic Pizza Express Jazz Club to launch his fist album, ‘New York-London Suite’. In the 2 years that Sam has been playing professionally in the UK and Europe, he has already collected awards that include 2 EMI Sound & Music Foundation Awards and he is sponsored by Trevor James Saxophones as their first ‘Emerging Artist’.

The Sam Barnett Quintet was formed from a group of leading young musicians in London who Sam had been working with for a number of years. This band has been formed from the current exciting new frontier of young jazz in London. The band range from 15 – 18 years old. These young jazz musicians are rising with an astonishing level and range of styles and skills, their new writing and compositions bringing fresh expression to the jazz art form. This artistry of youth leads us to look forward to an exciting future for jazz, with Sam Barnett’s Quintet at the heart of it.