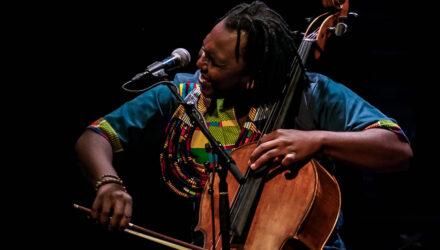 The band features an eclectic blend of instruments, including Abel Selaocoe on cello and voice, Sidiki Dembele on djembe, kora, n’goni, African percussion and voice, and Alan Keary on electric bass and voice.

Accompanied by the languages of Bambara, Zulu, Sotho, Tswana, and more, the music is full of improvisations influenced by African, jazz and classical music.

The concert is part of through the noise‘s noisenights series: informal crowdfunded events featuring international soloists in cabaret bars, converted warehouses, and nightclubs.

Each noisenight features two short classical sets, one early evening, one late. All tickets to the late set include live music for the rest of the night, including jazz, latin, afrobeat, swing and funk acts.