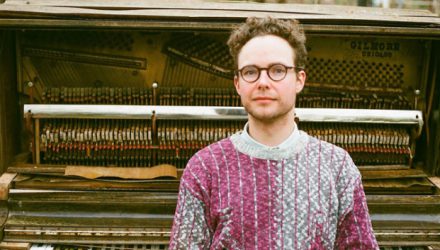 IAN WILLIAM CRAIG
One of Norman’s favourite artists, Ian William Craig is an operatically trained vocalist from Vancouver who uses tape loops the way a school-kid might a litmus test: reaching for success but infatuated with failure, his works break in and out of cycles, mutating to create immersive drone medleys as noisy as Belong’s but as humane as Grouper’s. He’s released two records with Sean McCan’s Recital label — the fragmented but songwritten A Turn of Breath and Cradle For The Wanting, which consisted of nothing but vocals fed through reel to reels — and he’s about to release another for FatCat’s classical imprint 130701. You shan’t want to miss this.
http://www.ianwilliamcraig.com/

MARLO EGGPLANT
Baltimore’s sound performance artist Marlo De Lara produces textural compositions under the Marlo Eggplant moniker. These develop from microscopic tone landscapes into dense and expansive states of noise and drone. Her works aim to blur the definitions of (un)intentional sound and music. The many noises and tones of De Lara’s live performances are sourced from autoharps, contact mics, vocals and loops, amongst other tools. Her pieces have minimalist origin stories that can be breached through a knowing and often slow-burning approach to improvisation. She curates the excellent Ladyz In Noyz series while playing a myriad of ever-changing shows through Yorkshire and beyond. A Marlo Eggplant set is sure to both establish sounds and let them establish themselves.
https://soundcloud.com/marlo-eggplant/
https://yorkshiresoundwomen.wordpress.com/

CORE OF THE COALMAN
Core of the Coalman’s Jorge Boehringer has his own Wikipedia page – so you know he’s good. A sound man of both academic and recreational disciplines, he’s done all things drone upon his viola while also tinkering through harmonica and electronics. His noise is a treat and his large discography of cavernous sound makes for a good musical vitae.
http://multiplesystemsofevents.wordpress.com