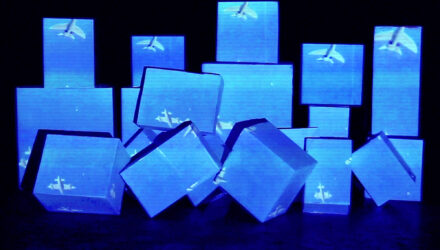 We’re thrilled to announce the upcoming release of O Superman, our first EP. It features our take on Laurie Anderson’s cult classic, featuring vocals from Jamie Doe aka The Magic Lantern, plus works by Jamie Hamilton and Leo Chadburn.

To celebrate, we invite you to join our (virtual) launch party.

The party starts at 8pm (GMT). So make yourself a drink, pull on your finest headphones and turn the lights down low…

– Live stream of EP with bespoke visuals made for the night

– Q+A with Phil Granell, Leo and Jamie, and the ever-charming Jamie Doe

More about the EP

O Superman digs deep into our fascination with the voice, America, and its music. It was recorded in London and remotely during 2020.

The title track is our homage to Laurie Anderson’s vocoder-drenched masterpiece, a song we’ve loved since childhood. Like those who first heard it on the John Peel show in 1981 – and for all those bewitched by it since – it will be forever distant and familiar.

Finally, we have Leo Chadburn’s 2011 X Chairman Maos. This is​ the second work of Leo’s we’ve performed over the years. Here we swap violins and violas for electric guitars and piano, with Sergio remaining on cello and Jamie Doe on vocals once again. Based on text from Chairman Mao Zedong’s infamous ‘The Little Red Book’, the phrases unfold over and over; the harmonies changing under each iteration.