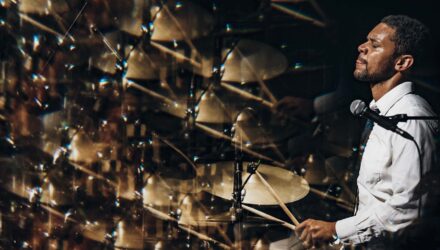 Powerhouse Myele Manzanza brings Oxford his heart and soul with a set ranging from cinematic loops and grooves to ‘jazz bottled lightning’. Raised on a staple diet of hip hop, jazz and dance music in his youth, Manzanza creates an organic sound exploring influences from hard bop to Detroit house and even a hint of free jazz.

Expect super-tight rhythm playing from long standing collaborators Manzanza on drums, Lewis Moody on keys and Benjamin Muralt on bass along with blistering melody lines from James Copus on trumpet and Emma Rawicz on saxophone. Led from the back by energy-filled Manzanza, the band will play from his “Crisis & Opportunity” series as heard at the EFG London Jazz Festival.

Myele Manzanza is from New Zealand and now lives in London where he has developed a strong live presence in his new London base. He is a founding member of Electric Wire Hustle and his band has drawn packed houses to top venues such as The Jazz Café and Ronnie Scott’s.

This concert is two 45 minute sets with an interval.