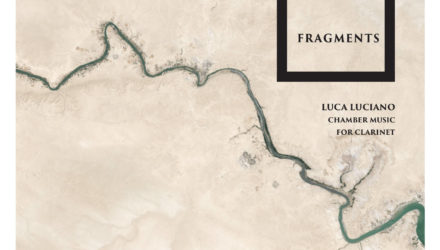 Clarinettist and composer Luca Luciano is officially presenting his new album “Fragments” at St James Piccadilly in London as part of his clarinet solo performance featuring his own music and material from the XX century repertoire. This performance is part of a tour of churhes and cathedral of the the UK and overseas along with world premieres of new pieces held at the Barber Institute of Fine Arts and at Cambridge University along with festivals and other concerts at Oxford, Paris, Portugal, Italy and South America.

Published by one of Europe’s most appreciated and the fast growing independent labels, NovAntiqua (LINK), “Fragments: chamber music for clarinet” features a comprehensive compilation of Luciano’s works published on his previous three releases as part of his academic research portfolio. The chamber music compositions for clarinet solo or clarinet ensemble included in this album are part of a broad selection of pieces published over the past years that the author himself has premiered at some of the most prestigious venues of the UK and overseas including St Martin in the Fields in London, Cambridge University and the European Clarinet Festival in Belgium. The music is informed by an on-going research on extended techniques, unconventional sound production, sound effects (and their application on composed or improvised music) and new music for solo clarinet that started when holding a position of clarinet professor in the UK and continued over the years with presentations at renowned universities and colleges in Europe and the Americas.