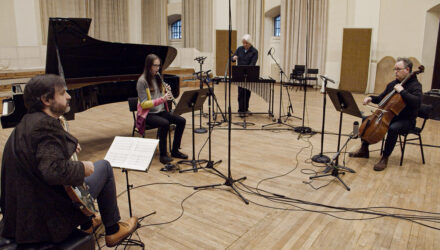 Experimental music in England remains in mourning for Cornelius Cardew, killed in a hit-and-run incident almost four decades ago. Aged forty-five at the time, Cardew could easily still be alive. It is impossible to imagine what he might have achieved by now, given sixty years of creative life. In twenty he did so much. First drawn to Karlheinz Stockhausen, with whom he studied, he swivelled in his mid-twenties towards John Cage and other members of the New York avantgarde. A growing sense of music as social activity led to an intense engagement with the political left, and it is this period that we sample here – this tragically final period, though not feeling final at all in its gaze straight ahead. As one of his titles puts it: “We Sing for the Future”.

First, though, we hear “The Croppy Boy”, one of the Four Principles on Ireland Cardew produced in 1974, during that long period of civil unrest in Northern Ireland. A “croppy” was a participant in the Irish rebellion of 1798, and “The Croppy Boy” is a ballad from back then, a lament for a volunteer who was executed. Cardew’s piano setting honours the song’s elegiac character.

A student at the time of Cardew’s death, Laurence Crane seems in his music to be looking back to that era with affection and regret – not least in John White in Berlin, saluting a composer who was a close colleague of Cardew’s. Crane’s compositions perfectly demonstrate the old truism that silence in music is as important as sound, and one of the advantages of a filmed concert is that we can see the silence: the silence of a cellist counting bars before the next short sequence of exquisite harmonics, the silence of a musician sitting at a piano that is making its own sounds by means of electronic bows playing on the strings, the silence in Gli Anni Prog when we do not know which of the players is waiting for the other, the silence in that same piece of a desk bell that surely is not going to stay unused all the way to the end. Such silences haunt this music. Sounds, too, of course. Echoing from elsewhere, stray fragments – bits of tune and chord progression – are made new by the surroundings (of silence, not least) they find here, but still they sound lost.

The finale returns us to Cardew, a few years later. He wrote We Sing for the Future in 1980 as a fantasia on a song made for young people, a song he quotes, with its words between the staves, when the music turns quicker and chordal around two and a half minutes in: “We sing for the future, / Proletarians of all lands”. Not long after this, the right hand alone, in plain melody, prepares for a stretch of Bachian counterpoint, but very soon this is capsized. Old life was rubbish, as they say. We need other ways of doing things. (Paul Griffiths, 2021).