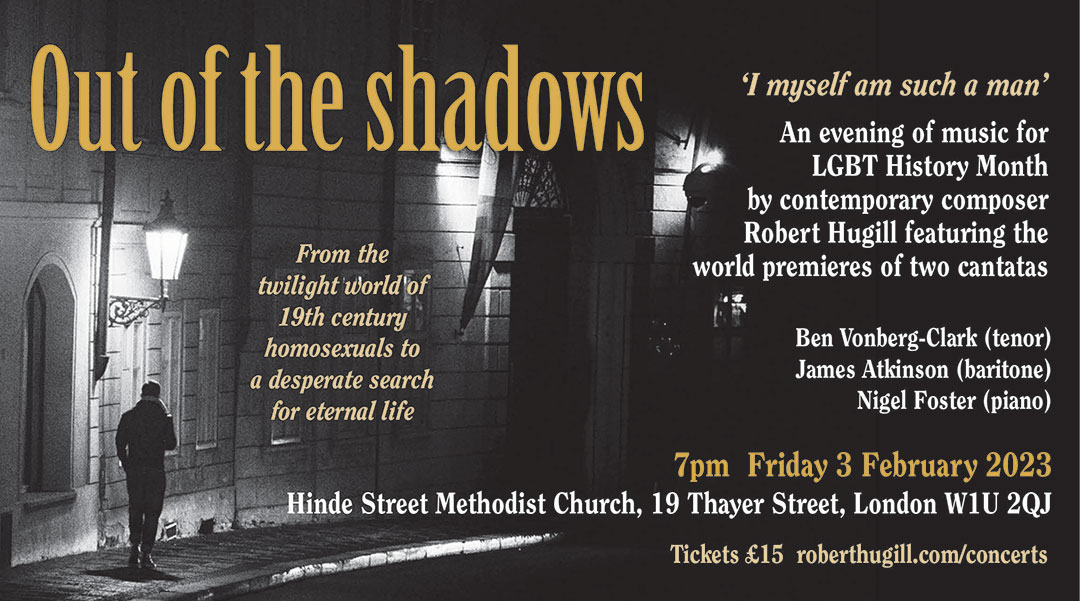 Out of the Shadows: an evening of music for LGBT History Month

As part of the LGBT History Month in 2023, Robert Hugill presents Out of the Shadows, a recital at Hinde Street Methodist Church on Friday 3 February 2023 featuring pianist Nigel Foster and tenor Ben Vonberg-Clark and baritone James Atkinson in the world premieres of Hugill’s cantatas, Out of the Shadows and Et expecto resurrectionem. Alongside these two will be a selection of Hugill’s songs, from love songs and settings of Michaelangelo’s sonnets to a depiction of an Aids candlelit memorial in Memorare.

Out of the Shadows charts the gradual emergence of gay men during the 19th century, and their gaining in confidence at being present and part of society. Taking in solos for tenor and for baritone, along with duets, the cycle moves from tentative admissions, setting texts from Carl Pontus Wikner’s Psychological Confessions and Friedrich van Ramdohr’s Venus Urania, through Joe Ackerley’s description of cruising in a hostile climate from My Father and Myself and Mikhail Kuzmin’s more comic description of a Russian bath house visit, to Walt Whitman’s unashamed declaration of same-sex attraction in To What you Said.

Bringing the story more up to date, the evening will also include Hugill’s song Memorare from his 1998 cycle Songs of Love and Loss, setting M.V. Lively’s poetic description of an AIDS candlelit memorial. There are also love-songs, both the complexities of settings of John Addington Symonds’ translations of Michelangelo’s sonnets and the more direct experience of the 20th century Black American poet Carl Cook.

The cantata Et Expecto Resurrectionem looks at more general ideas of life after death. Written as a continuous sequence for tenor, baritone and piano it begins with the Latin affirmation of the Resurrection from the Creed, and then works through ideas of Cryogenics, the 18th century grave-robbing of Burke and Hare, and Mary Shelly’s Frankenstein, ending in a landscape full of Walt Whitman’s homo-erotic pantheistic transcendentalism.