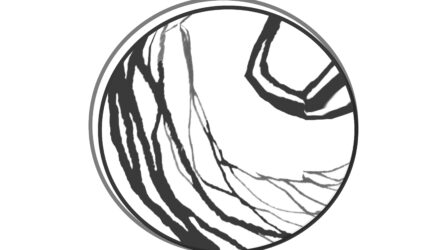 OVER / AT presents: A/am/ams (come ashore; turn over)

Rufus Isabel Elliot’s new work is the story of two characters, A/am/ams and E/e/e, walking forever down an eternal beach, spiralling down and down and down. There’s a Beckettian mystery – who are these characters, and what happened between them?

The music features Scots traditional singer Josie Vallely, a.k.a. Quinie. There’s a small supporting cast of instruments with their own characters, who each also “speak” in their own way, played by three other musicians whose work spans traditional, experimental, and classical modes – Stevie Jones (Sound of Yell), Harry Gorski-Brown, and Andrew Herrington (Awkward Family Portraits).

The work also features a new text by Rufus, which imagines a new mouthful-of-sand future-language of the North West, spanning Older Scots and Middle English, which is presented alongside a new Gaelic interpretation of the text, by Cass Ezeji.

This event will have a small, physically distanced audience.

The 2021 OVER / AT season has been developed as part of Sound and Music’s Composer-Curator project, in partnership with Supersonic Festival, which is funded by Arts Council England and PRSF. ATLAS Arts have acted as a partner organisation in developing the context of A/am/ams in Skye, and our workshops and performances in Elgol.

A/am/ams was initially developed with singer Lea Shaw and with support from Magnetic North during the 2020 Lockdown.