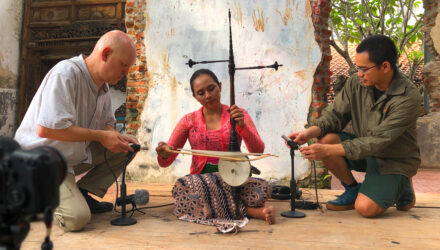 Weaving together contemporary electronic music and traditional folkloric influences, PARARATRONIC is a collaborative release from Indonesian composer KUNTARI and British artists ADDICTIVE TV. The Pararatronic name refers to the Pararaton, the ancient Indonesian book of kings and its stories of legacy, contradiction and the legends of Ken Arok.

With textured aural layers, at times dark and haunting and at others ethereal and joyous, the project features four idiosyncratic tracks, two from each artist. The compositions are based on field recordings made by KUNTARI and ADDICTIVE TV in Indonesia in 2020, including with traditional sinden singer Nur Handayani.

On Thursday 24th February, you are invited to an informal and interactive online session with KUNTARI and ADDICTIVE TV who will share insight into the making of the project and will be joined by musicians featured in the tracks.

The session will last 1 hour, from 1pm UK time, which is 8pm in Indonesia.

A departure from his classical and jazz background, award-winning Tesla Manaf, aka KUNTARI, traded in his guitars for sequencers, effect pedals and synthesizers to create the intricate analogue soundscapes for the project.

ADDICTIVE TV, known for their innovative use of audio/video sampling, created their two new tracks for their acclaimed project Orchestra of Samples, where for over a decade they’ve recorded an array of distinctive sounds on their global travels, sampling and creating musical conversations, connecting cultures around the world.

PARARATRONIC is supported by the British Council Indonesia as part of their Connections Through Culture initiative.