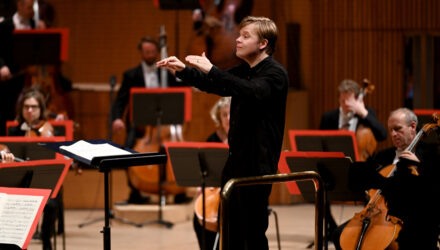 Pekka Kuusisto has a real gift for communicating through music. That could mean getting a concert audience of 6000 singing a Finnish folksong, or playing electric violin in a collaboration with a juggler, or making a film for Greenpeace in a devastated forest… Tonight he shines his distinctive light on one of the world’s best-loved musical depictions of nature, Vivaldi’s The Four Seasons, interspersing the familiar movements with improvisation.

Britten’s Four Sea Interludes are taken from his opera Peter Grimes, a compelling portrait of a fishing community whose lives are intertwined with the sea and the weather. The orchestra vividly depicts the different faces of the sea, from dawn tranquility to a fearsome storm.