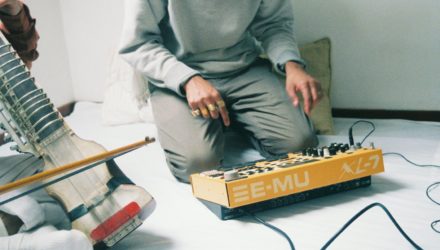 After their 2012 inaugural performance at Tate Modern The Tanks, the duo Jatinder Singh Durhailay and Suren Seneviratne return to their fruitful collaboration with a new experimental and minimalistic sonic musical endeavour titled Petit Oiseau. The project brings together rare classical Indian string instruments played by Durhailay known as the Dilruba and the Taus, unusually combined with Seneviratne’s interests in alternate tunings and numerology through custom patches built on a E-MU Command Station digital synthesizer.

Petit Oiseau, French for ‘small bird’, encompasses both the airiness of the avant-garde compositions, while also standing as a poetic ode to migration and South Asian diaspora.

Jatinder Singh Durhailay, is a painter and musician born and based in London. Recent performances include The National Gallery (London), Het Bos (Antwerp), Vacant and Atelier Fluss (Tokyo).

Suren Seneviratne, a.k.a My Panda Shall Fly, is a musician born in Sri Lanka and currently based in London. Recent performances include Barbican and Boiler Room (London).

We are sad to announce that unfortunately Otim Alpha will no longer be performing due to visa issues. We will announce a support act for Petit Oiseau shortly.