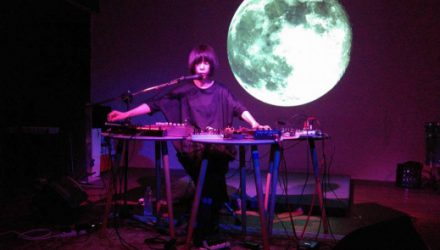 The legendary Japanese singer Phew will be making her first ever appearance in the UK, some four decades after she got bitten by the punk bug when her teenaged self visited London in the late 1970s. Now going out entirely solo accompanying herself on analogue electronics and drum machine, Phew is set to make her UK performing debut at London’s IKLECTIK on 8 October. The concert immediately follows her performance with Danielle de Picciotto & Einstuerzende Neubauten’s Alex Hacke at Wroclaw ’s Avant Art Festival.

Phew’s forthcoming concert in Wroclaw continues the solo project she has been developing since 2013, when she converted to analogue electronics.She charted her own progress over the course of the three self-released CD-Rs she sold at her solo concerts. In December 2015 she released her first almost entirely solo-driven CD, aptly titled A New World, on the Japanese label Felicity featuring nine songs mostly backed by herself on electronics and drum machine, which includes her remake of her debut single “Finale 2015” and a highly idiosyncratic cover version of Johnny Thunders’ “Chinese Rocks”. In 2016 she released a companion CD Jamming on her own BeReKet label. Today, Phew live combines the latter’s two analogue electronic jamming methods with her new approach to song, as documented on A New World.

Meanwhile, Phew’s festival appearance in Poland renews the singer’s special relationship with the German underground that’s been a constant since she launched her solo career in 1980. But we’re getting ahead of ourselves. In 1978 Phew started out as the singer in Aunt Sally, the pioneering Japanese punk group she formed in Kobe after exposure to The Sex Pistols infected her with punk’s self-belief that music was all about doing it yourself. Aunt Sally split up shortly after releasing their self-titled album in 1979.

A year later Phew released her debut solo single “Finale”, produced by Ryuichi Sakamoto. In 1981 she went on to record her debut solo album Phew at Conny Plank’s studio in Cologne, accompanied by the legendary German producer, and Can’s Holger Czukay and Jaki Liebezeit, The album was the first of what some might call her German album trilogy. Since recording her debut in Cologne, Phew would go on to re-establish contact with German underground legends in order to record two more singular one-off albums. Firstly, she returned to Conny’s studio to make Our Likeness (released by Mute in 1992) with former DAF/Liaisons Dangereuses member Chrislo Haas, the aforementioned Alexander Hacke, and their ex-Crime And The City Solution colleague Thomas Stern, plus Jaki Liebezeit. And in 2011, she and Erika Kobayashi formed Project UNDARK to record the songs of Radium Girls with music by the late Dieter Moebius, of Cluster.

These international albums are of a piece with Phew’s career as a performing and recording artist. In Japan she has released a series of acclaimed albums under her own name or in collaboration with leading Japanese musicians such as turntablist, guitarist and improvisor Otomo Yoshihide, or ex-Boredoms guitarist Seiichi Sakamoto. With Seiichi Sakamoto Phew formed her contemporary punk group Most, releasing three albums, alongside a duo set of chansons. Her other projects include the electronics and voice duo Big Picture with Hiroyuki Nagashima.

Olivia Louvel is a French-born, British composer, producer and artist whose work draws on voice, computer music and digital narrative. She operates on the frontier of art and electronic music, blurring the boundary between the two. Over the last decade, she has released 5 solo albums published on various labels, Angelika Koehlermann (Austria), Optical Sound (France) and on Cat Werk Imprint, her own production tool. Her latest release is ‘Beauty Sleep’, 11 songs complemented by a series of experimental short films shot in West Sussex, reinventing herself as a birdwoman.

Her work has been supported by the Arts Council of England and she was awarded the Qwartz Album for ‘Doll Divider’ at the Qwartz Electronic Music Awards in 2011. She has received extensive airplay on significant radio programs throughout the world (BBC Radio 3, Resonance, RTVE radio 3, Rai 3, RTE, France Musique…) She has performed alongside artists such as Planningtorock at the Earsthetic Festival, Brighton Dome and Recoil for various concerts on the European ‘Selected’ tour.

Earlier this year, she contributed a compelling audio-visual project ‘Afraid Of Women’ to #Rojava, a female:pressure campaign curated by Antye Greie-Ripatti aka AGF that aims to show solidarity and raise awareness for a special de facto autonomous zone in northern Syria.

Olivia Louvel recently collaborated with Paul Kendall (The Digital Intervention) with the piece ‘When the sea will rise II’ produced for Acoustic Cameras, a project which invites sound artists to annex the real-time flow of webcams located in various places around the world.

She is currently working on a mixed media project ‘Data Regina’ in which she explores the reign of Mary Queen of Scots Vs Elizabeth I and will deliver her own singular digital transposition through a CD publication and an interactive digital work early 2017.