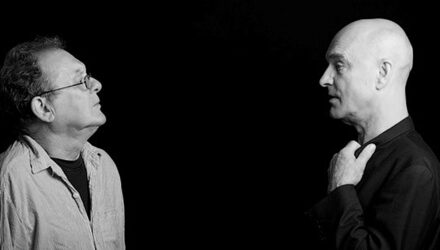 This extraordinary duo have played together for 40 years, touring Europe, U.S.A. and Canada. Roger Turner plays drums and the 81-year old Phil Minton makes noises with his mouth.

? “This longstanding duo can access places so remote, so singular that they could only emerge from a musical partnership decades old.” (Cadence Magazine)

? “Minton’s unfailingly ability to make unexpected sounds come out of his mouth, often inhuman, often all too human, owe as much to Beckett’s Not I as to the sacred tablets of improvised music. Panic, terror, social embarrassment, primordial energy and existential awe break the barriers of Minton’s all-consuming and physically exhausting soundscape.” (Stewart Lee)