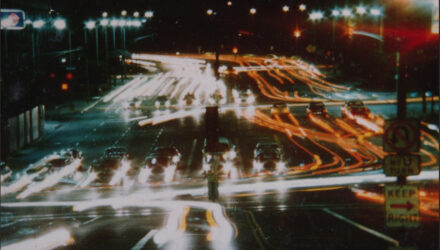 In the late 1970s, filmmakers Godfrey Reggio and Ron Fricke travelled the United States creating and collecting film of deserts and dams, mines and mountains, clouds and cities, explosions and electricity pylons, planes and people. This they choreographed to a hypnotic score by Philip Glass, the loops, pulses and waves of sound matched to footage played forwards and backwards, in slow-motion and time-lapse.

The result is extraordinary, thought-provoking, poetic. This rare screening of the film with live music, performed by the Philharmonia Orchestra and the Philip Glass Ensemble, is a highlight of the Philharmonia’s Human / Nature series.