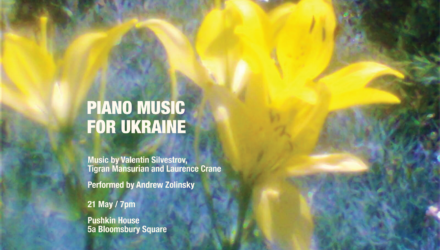 British pianist Andrew Zolinsky will perform an hour-long programme featuring works by Valentin Silvestrov (Ukraine), Tigran Mansurian (Armenia) and Laurence Crane (UK). The concert presents three living composers, outlining connections between the music formed in the Ukranian and Armenian avant-garde of the ‘70s, and the British experimentalism of the ‘80s and ‘90s – each attempting to establish new grounds in the melodic, the tonal, the lyrical and the familiar.

The concert has been organised to raise funds for people affected by the ongoing war in Ukraine and the humanitarian crisis it has caused. 70% of the ticket proceeds will go to the Disaster Emergency Committee’s Ukraine Appeal to support refugees from Ukraine.

1. Waltz of the moment

3. Waltz of the moon