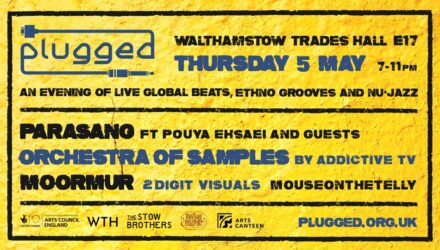 On Thursday 5th May at Walthamstow Trades Hall, east London music initiative Plugged presents a journey into sounds from around the world, bringing together three live acts exploring global beats and electronic ethno-grooves.  A live set from Parasang with Iranian producer Pouya Ehsaei and guests blending electronics with jazz and dub; AV artists Addictive TV perform their acclaimed Orchestra of Samples on a huge cinema screen, sampling and splicing hundreds of musicians they filmed around the world over a decade; and Moormur collaging his field recordings and synths.

Parasang is the brainchild of Iranian electronic wizard Pouya Ehsaei and producer and promoter Harry Follette celebrating the myriad of different sounds in London today. The live improvised performance brings together an eclectic selection of London-based musicians from different cultural roots and musical backgrounds to create a new musical form that is both ancient and new, spontaneous and organised. Expect modular synths and electronics blended with a flavour of jazz and dub, with special guests award-winning trumpet player Laura Jurd and Ghanaian-born percussion master Afla Sackey.

Orchestra of Samples is the global music project by ethno-sampling mavericks Addictive TV. Described as “ingenious and compelling” by The Times, the acclaimed live performance is a unique musical AV journey without borders based on sampling improvised recording sessions filmed with hundreds of musicians around the world over the last ten years. Immerse yourself in mesmerising musical dialogues with live musicians on stage, sampled musicians on screen and discover instruments you never knew existed!  Special guests for the night are soulful vocalist Plumm, electronic wind instrument / EWI player František Holčík and percussionist extraordinaire Michael ‘Fordey’ Forde.

Moormur is a London based producer and beat maker whose work explores the rhythms and sounds from across the globe. The music is a ‘collage’ of samples, field recordings, and synths, and takes inspiration from spiritual music, instrumental hip hop, African rumba, IDM, contemporary jazz and ambient. With his live set, he brings to the stage percussion and electronic pads, enchanting the audience with dynamic grooves.

Parasang and Moormur will feature visuals by 2-Digit Visuals & Mouseonthetelly on the specially brought in large cinema screen!

Plugged is a music initiative encouraging wide participation in music making using the latest technology. With events and workshops, Plugged drive creative collaborations, connecting music-makers, young participants, and audiences from all musical and cultural backgrounds. This event is made possible with support from Arts Council England. Thanks also goes to The Stow Brothers, Rhythm Passport and Arts Canteen.