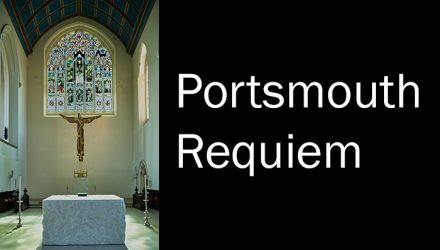 The World Première of Portsmouth Requiem is being presented by Wyndcliffe Voices and Portsmouth District Composers’ Alliance in memory of several members of the organisation and performers who have worked with the organisation who have died over the last few years. Several members of the PDCA have contributed movements to the Requiem. There will also be works composed by some of the composers who have passed, including works for violin and violin duet. The concert is being given in support of Macmillan Cancer Support.
Composed by members of the Portsmouth District Composers’ Alliance: Philip Drew, Phillip Pennington Harris, Judith Bailey, Michael Lawlor, Paul Pilott & David Penri-Evans.
Performers: Wyndcliffe Voices, Philip Drew (organ), Michael Lawlor (oboe), David Penri-Evans (conductor), Catherine Lawlor (violin), Alex Hu (violin).
www.facebook.com/groups/1898359530384079/