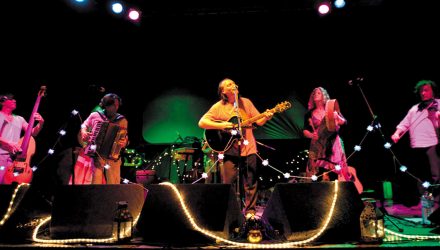 Praying for the Rain in concert Frome Festival 2017

Following last year’s sell out concert, Praying for the Rain return to Rook Lane Chapel on Friday July 7th to open Frome Festival 2017. The evenings music will include a selection of songs from various Pftr albums, new music from the upcoming Cd and some songs from Seeds of Evergreen, the recent solo project from Domenic. Known for their dynamic and compelling live performances, Pftr blend contemporary folk, Celtic and world music with irresistible rhythms, memorable melodies, beautifully crafted vocals and inspired musicianship. Their music brings to mind a modern blend of Crosby, Stills and Nash, Robert Plant, to Fleet Foxes and the Dave Matthews Band, creating a truly uplifting experience.
Internationally recognized, they have travelled throughout Europe, Canada, Africa, and the Middle East and have performed at festivals such as Glastonbury, Womad and Stainsby and at London’s Union Chapel and South bank as part of a world music series presented by the National Theatre.
Expect an exhilarating night of high energy, movement and wonderfully engaging songs. This is sure to be one of the highlights of the 2017 festival.
“this driven musical collective lead by the visionary DeCicco brothers just can’t stop the potency of their music and the uncanny enchantment it spreads amongst all of us who have been fortunate enough to hear the music and follow their journey”.
Max Reinhardt BBC 3 presenter on Late Junction