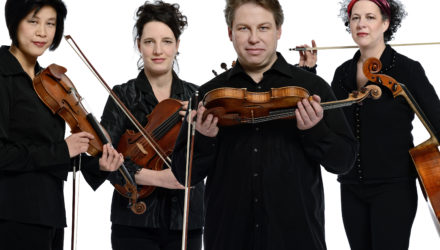 The acclaimed Canadian quartet are renowned for their pioneering approach to new music. This evening’s programme opens with a British first half featuring three very different composers and including two new works; Débricollage by John Woolrich, premiered in March 2019 by the quartet, and the World Premiere of Michael Finnissy’s East London Heys. The second half focusses on the last of Shostakovich’s quartets. Comprising six linked slow movements, it is arguably his most intimate and moving work for the medium.

‘Débricollage is the latest addition to Woolrich’s A Book of Inventions, an ongoing collection of such compact pieces that will eventually consist of 10 quartets. His title is borrowed from a kinetic sculpture by Yves Tinguely, in which an assemblage of everyday objects move around each other according to unrevealed rules. Woolrich’s piece also brings together unexpected, apparently unrelated ideas, and creates a narrative to bind them. Sudden brief unisons anchor the music and launch it in fresh directions, whether those are long-limbed melodic lines or clockwork pizzicatos. A fragile, teasing coherence gradually emerges.’ The Guardian