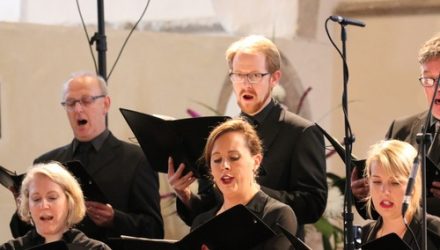 The BBC Singers and BBC Radio 3 return to JAM on the Marsh after last year’s wonderful concert, broadcast on Radio 3, featuring the world premiere of Voices of Vimy, for choir and cello. This year the Singers tackle one of the greatest choral works, Rachmaninoff’s Vespers, as part of the festival’s commemoration of WW1 – it seems extraordinary that this intensely beautiful masterpiece was written during such a hellish time! Since 2014 we have included many works based around the Great War, including the Vespers in our first concert of our first festival. This year we have five events connected to the most awful of wars.

The astonishing Canadian-based, Swiss conductor Michael Zaugg makes his festival and BBC Singers debut conducting the Rachmaninoff and a world premiere by the wonderful Scottish composer, Rory Boyle. This Festival Commission has words about the Romney Marsh, Kent and our community by the outstanding poet, Claudia Daventry.
This concert is an absolute MUST for choral lovers!