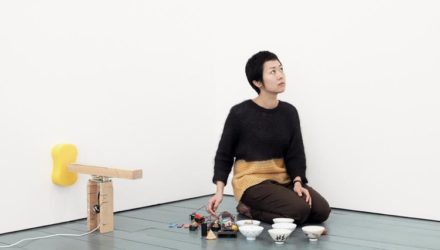 A host of astonishing musicians come together for our annual extravaganza from beyond the borders of the avant garde, at the invitation of Resonance FM co-founder and BASCA award-winning sound artist Ed Baxter. Featuring Langham Research Centre, Rie Nakajima, Chihiro Ono, Jennifer Walshe, Veryan Weston and more!

Langham Research Centre work with obsolete equipment including tape recorders, gramophone cartridges and sine wave oscillators, to perform authentic versions of 20th century classic electronic repertoire by John Cage, Alvin Lucier and others, and to compose their own new music – most recently “Gateshead Multi-storey Car Park 2018” (on Econore), a piece made entirely from sounds of the car park famously featured in the 1971 movie “Get Carter.”
Rie Nakajima is a Japanese artist working with installations and performances that produce sound. Her works are most often composed in direct response to unique architectural spaces using a combination of kinetic devices and found objects. Her frequent collaborators includes David Cunningham, Keiko Yamamoto, David Toop and Akira Sakata. In 2014 she received the Art Foundation Award for Experimental Music.
Violinist Chihiro Ono’s repertoire ranges across Medieval, Baroque, Classical, Contemporary, Experimental Music/Theatre, Performing Art, Improvisation, Noise, and Sound Art. She also feels strongly connected with Japanese traditional music, sounds and theatre. “Why music? Because music teaches us everything.”
Accurately described as “the most original compositional voice to emerge from Ireland in the past 20 years”