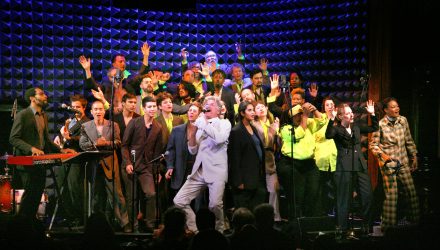 If you’re concerned about a world rife with global advertising, multinational control, climate change, the threat of nuclear war and a maverick, Twitter happy US President this is for you. If you’re not concerned, this is REALLY for you!

Since the Frankenstein of shopping culture Donald Trump won – or stole – the US election, Reverend Billy & the Choir have been a repository of community anguish. They have opened for Neil Young, been produced by Laurie Anderson, and hosted a Black Lives Matter benefit with Joan Baez. They host their own parades, boycotts, and protests – all whilst singing multiple harmonies – and make a point of regularly spending time in the little-known public garden on the 5th floor of the ‘700 ft. tall gold-tinted Presidential erection’ that is Trump Tower.

Rev Billy & the Stop Shopping Choir is a New York City based radical performance community, with 50 performing members and a congregation in the thousands. They have performed on the streets, in concert halls, in shopping malls and at cash tills, working with communities on four continents to defend community, life and imagination against Consumerism and Militarism. www.revbilly.com