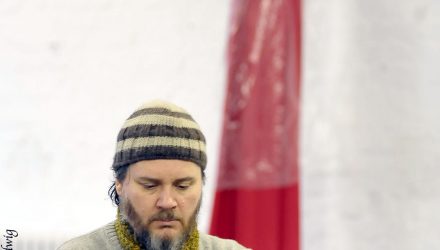 Richard is an English free improvising musician and electroacoustic composer living in Berlin working with electronics including modular synthesisers and controllers such as the Buchla Thunder and Lightning. He has been composing and performing for over 25 years, recently working with Evan Parker, Jon Rose, Richard Barrett, Kazuhisa Uchihashi, Shelley Hirsch, Ute Wassermann, Axel Doerner, Audrey Chen, Frank Gratkowski and his own Lightning Ensemble. He studied free improvisation in the 1980s with John Stevens, saxophone with Elton Dean and Steve Lacy, and more recently electroacoustic composition with David Berezan and Ricardo Climent. He has had performed at concerts all over Europe, had several pieces featured at at the International Conference of Computer Music. He has released many albums, for example with Grutronic and Evan Parker for PSI records, “The Magnificence of Stereo” (sruti BOX), a series of duet and trio releases, a solo double modular synthesizer LP, “Several Circles” and an album with Sidsel Endresen, “Debris in Lower Earth Orbit” on CUSP Editions. He runs a digital label, Sound Anatomy, is initiator of the Sines&Squares Festival in Manchester, and has curated several concert series in Berlin, including Basic Electricity, AUXXX and Sound Anatomy.