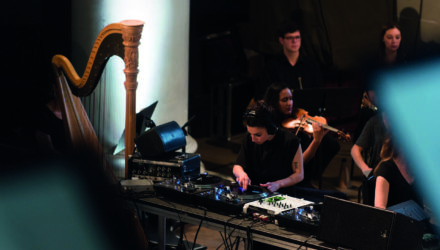 Spitalfields Music brings a symphony orchestra to the home of British boxing with a concert celebrating two cutting edge contemporary British composers and a 20th-century revolutionary.

Following both artists’ hugely successful programmes at the BBC Proms 2018, we’re delighted to feature Anna Meredith (‘One of the most innovative minds in modern British music’ Pitchfork) and Shiva Feshareki (2017 BASCA British Composer Award for Innovation) at this year’s festival. Expect a deconstructed orchestra, surrounding the audience and a guest appearance by soloist Jurgen van Rijen, the most celebrated trombonist of his generation. The evening ends with a performance of Stravinsky’s timeless masterpiece, The Firebird Suite.