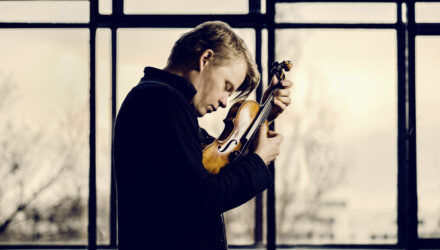 Witness The Rite of Spring – a rite of passage for the Philharmonia Orchestra’s new Principal Conductor, and a visceral experience for performers and listeners alike.

Stravinsky’s ballet changed the course of music history, with its stamping rhythms, violent dissonances, and menacing, primeval soundworld. Its story of pagan rituals heralding the spring, culminating in a sacrificial dance, leaves us in no doubt as to how closely human lives are tied to the life and rhythms of the Earth.

Silvestre Revueltas’s score for the 1939 Mexican film La Noche de los Mayas also evokes a time before modern ‘civilisation’ separated us from nature. The third part we hear tonight is a gentle nocturne, with a traditional Yucatán evening song, played by flute and percussion, at its heart.

Charismatic violinist Pekka Kuusisto, the Philharmonia’s Featured Artist this season, joins the Orchestra for Bryce Dessner’s Violin Concerto, commissioned for the Human / Nature series. Bryce Dessner is one of the most versatile musicians working today. His music is performed widely by the worlds leading orchestras and he is featured regularly at major festivals. Besides his classical work he is a founding member of The National and works with peers in other genres such as Sufjan Stevens, Paul Simon and Taylor Swift.