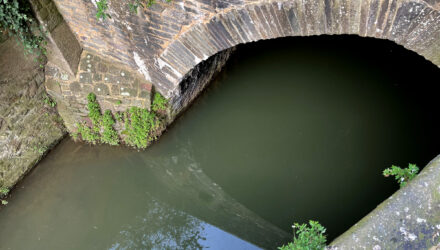 At 4pm this subaquatic soundscape morphs into a live site specific performance inspired by listening to the underground resonant spaces of the river Frome, flowing under the city. The hidden soundscape of the Frome is translated into a multi-layered, spatialised composition for brass, featuring Bristol musicians Pete Judge and Liz Purnell joined by Sam Underwood (ORE) and Sophie Cooper and an all-comers ensemble, together, sounding Bristol’s river Frome as it is reunited with the tidal river Avon.

At sunset, when the tide is at its highest point of the day, lights will flicker onto the water of the Avon cut, close to the point where the Frome re-joins the tidal waters of the Avon from its underground passageway through the city. As the tide goes out, a film projection will gradually be revealed onto the mud banks. This 16mm film is created from particles, sediment and plant matter gathered from the whole length of the river frome and exposed onto celluloid film, developed using plants and water from the river.

This is a free event for the citizens of and visitors to Bristol. Booking not required, just turn up and submerge yourself in the sounds of the underwater world.

River Echoes is commissioned by Ginkgo Projects and sponsored by Bouygues UK, the construction company delivering Bristol’s landmark Castle Park View residential tower, as part of its commitment to the city’s wider community.