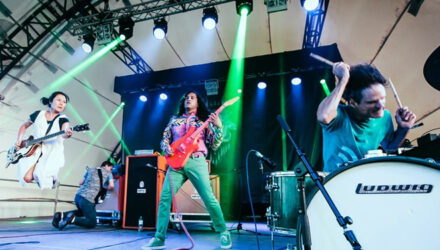 Labelled by Pitchfork as “the best band in the world” and the New York Times as “one of the most original rock bands to have come along in the last decade”, Deerhoof is Greg Saunier, Satomi Matsuzaki, John Dieterich and Ed Rodriguez. Kicking off in San Francisco in the mid-90s, the band have evolved through lineups and styles, tirelessly probing the outer limits of rock, pop and noise. They’ve toured with Radiohead, Flaming Lips, Red Hot Chili Peppers and Beck, curated Sonic City festival in Belgium, headlined Big Ears Festival, and released over 20 albums. Like Pitchfork said, best band in the world. Meanwhile, the institutions of modern music academia have slowly but surely focused their gaze on the band – Deerhoof’s genre irreverance, unbridled invention and unique approach to ensemble playing cannot be ignored as a valuable asset of the avant-garde.

This workshop is an opportunity to spend five days in the epic Pyrenean mountains with Deerhoof, learning, discussing, developing your playing, building new musical connections and opening your rock band mind. It’s about playing technique, improvisation, collaboration, composition, space, interaction and listening – all the things that make an ensemble work. Over five days, a small group of adventurous players will split down into ensembles, develop playing techniques and musical interaction skills, building new work every day under the guidance of the four members of Deerhoof, ending each day with a performance and feedback session. In the downtime we’ll hang out, listen to music, watch films, drink wine, swim in the river and hike in the forests and peaks of the Pyrenees.

The workshop is open to people of all musical abilities, and players of all instruments (including traditional rock band stuff but also computers, field recordings or anything else). Throughout the workshop our extensive recording facilities will be available for use, and we’ll work towards gathering recordings for a final release on CAMP Editions.