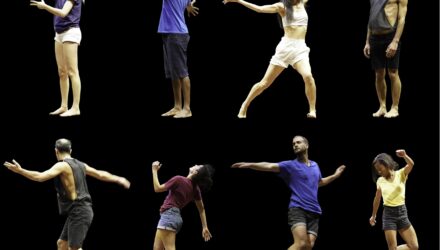 In 1964, Terry Riley kicked off a revolution with his landmark piece, In C. In 2001, Bang on a Can released a recording of their interpretation of the minimalist classic with a singular combination of amplified instruments from around the globe, propelling Riley’s transcendental masterpiece into the future. This recording on Cantaloupe Music was on The New York Times’ Top 10 Classical CDs of 2001 and Top 10 Pop CDs of 2001, as well as the No. 1 Ambient/Instrumental Record in Pulse!

On March 6, the Berlin-based dance company Sasha Waltz & Guests offers a live viewing of a brand new and innovative artistic process incorporating both digitally recorded and live formats, based on the musical foundation of In C. Waltz and her dancers have developed choreographic material that follows a similarly variable structure and is deliberately designed not to be a finished stage piece. This performance will be set to Bang on a Can’s 2001 recording.

Sasha Waltz explains her vision for the project: “The score of In C consists of fifty-three musical phrases and reads like stage directions for musicians. The thought of translating these detailed instructions into dance through a choreographic exploration of the music appealed to me. The result is an experimental system of fifty-three movement phrases for a structured improvisation with clear rules and laws. The length of the piece remains variable, as does the number of musicians and dancers.”