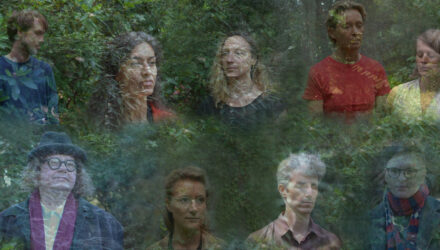 SEE HEAR is a video work conceived by artist Mareike Yin-Yee Lee as a complement to and extension of Marc Sabat’s music composition Gioseffo Zarlino (2015), in which nine lines of just intonation counterpoint recur in ever-changing vocal and instrumental constellations. Each transformation of the musicians’ simple stepwise motions casts subtly microtonal refractions of intonation and association. Lee and Sabat collaborate to create a new audiovisual mix of the original materials recorded in 2019 and 2021 in Berlin.

The visual work features a montage of the nine musicians in a sustained act of deep listening.  The images hone in on subtleties and delicate changes manifest in the musicians’ faces while engaged in concentrated attention to their surroundings, engaging a kind of delicate attunement and awareness crucial to this music. Each element is precisely, mutually contingent upon the others, individually and collectively – interactions play off of each other in an ever-changing, ever-evolving dance.

Marc Sabat’s captivating Gioseffo Zarlino finds new meaning in sixteenth-century musical theory, renewing the Renaissance. Marc Sabat’s Gioseffo Zarlino is “the third in a series of pieces inspired by ideas in the history of music theory, which I seek to experience and unfold in a sounding world” (taken from the liner notes by the composer). In the piece, unfolding cyclically, voices, strings, harp, and flute, weave through each other exploring a novel tonal space developed by the Renaissance Italian Composer-Theorist, Gioseffo Zarlino in 1558 and reinterpreted in the 21st Century by Sabat. By articulating minor differences in tone and interval (through instrumentation and vowel formants) during successive interpretations of the piece, Sabat conjures the spirit of restless innovation put forth, and all too often forgotten in modernity, over 400 years ago by music theorists such as Zarlino.