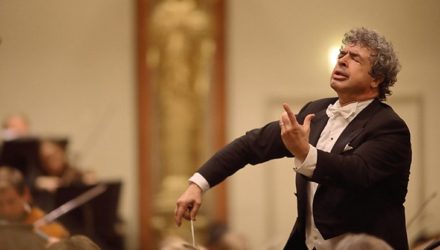 Semyon Bychkov leads the Orchestra, soloists and BBC Singers and Symphony Chorus in the UK premiere of a major new work by Detlev Glanert.

In 2016, Detlev Glanert chose to mark five centuries since the death of his countryman, the painter Hieronymous Bosch, with a grand and extraordinary new work. Glanert’s Requiem for Hieronymus Bosch, unveiled that year in Amsterdam, combines the Latin texts of the Requiem Mass with selections from the medieval manuscript collection Carmina Burana. The result, for four soloists, two choirs, organ and orchestra, is an ‘inward spectacle’ equivalent in intensity to one of Bach’s passions but full of Glanert’s radioactive excitability and irreverence.

There is also a free, pre-concert talk at 6pm, in which composer Detlev Glanert talks about his life and music, and introduces his Requiem for Hieronymus Bosch before the evening concert. There is limited capacity for the talk, but admission is guaranteed to Day Pass holders.

This event is part of the BBC’s ‘Glanert: Total Immersion’ series.