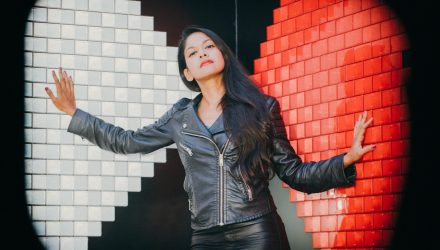 SHAMA will perform with her electro-acoustic band with live Sitar, uniquely taking it out of the traditional context, across genres including jazz, live electronics, psychaedelia, pop, afro latin worldbeats & Indian/Western melodies.
Her music has been championed by the likes of Gilles Peterson,Worldwide FM Songlines and the BBC

Her new album ‘Truth BeTold’ is the first live album to be recorded throughout using the pioneering wearable technology ‘mi.mu gloves’ developed by Imogen Heap.
Shama was the first artist-in-residence and along with only a handful of ‘glovers’ in the worldwide community, she uses the gloves to create sounds and FX by hand gestures. The recordings therefore have live electronic manipulation with improvising musicians including MOBO-winner Moses Boyd, capturing an electric live atmosphere with the polish of a studio album. This infectious energy is what is translated in her live shows with the electronic wizardry of ‘Slowly Rolling Camera’ producer Deri Roberts

Her multimedia performance of the album at the Southbank was featured on Channel 4’s Sunday Brunch and most recently, she performed the album on an expedition as the first Sitarist in Antarctica as part of the first Antarctic Biennale – which made The Times and Radio 4’s Front Row.