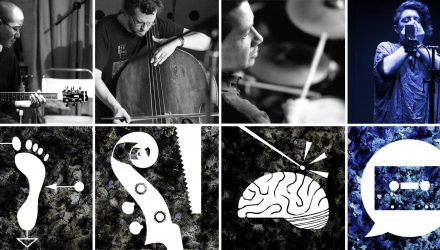 Sirene 1009, “a fierce, adventurous band that goes… into the unknown, fearlessly in search of the new” (David Menestres, Free Jazz), makes their Cork debut as part of the Arts Council of Ireland funded series, starting with a free concert at 1:10pm on Friday, 7 April 2017 at the Aula Maxima, UCC, continuing at 8:00pm on 19 May, Stack Theatre, CIT Cork School of Music. Sirene 1009 is the cyborg virtuosity of Han-earl Park, the indomitable low-end growl of Dominic Lash, the unstoppable hits and clangs of Mark Sanders, and the controlled vocal mayhem of Caroline Pugh.
Presented with funding from the Arts Council of Ireland, and support from FUAIM: Music at UCC, UCC Music Department, CIT Cork School of Music and the Cork Improvised Music Club.