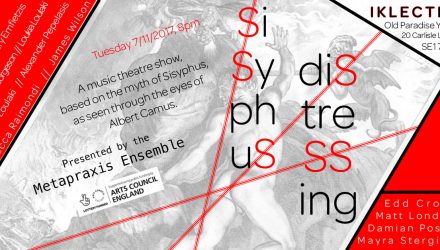 Sisyphus Distressed is a music theatre performance devised by Gregory Emfietzis for the Metapraxis Ensemble. On 7 November, Albert Camus’s birthday anniversary, seven musicians bring to life seven pieces creating a narrative based on the myth of Sisyphus.

An avant-garde sonic environment full of experimental, theatrical and visual elements intersect with the absurd narration of the well-known myth (as it was seen by Camus). This is the second part of a music theatre trilogy, based on Camus’s notion of revolt: “the attitude of heroic defiance or resistance to whatever oppresses human beings”.

As part of this project, the premiere of Gluttony: Live to Drink is taking place. The development of this piece for flute and percussion included the making of a new instrument with several bottles and liquids, built by the Leeds College of Building!