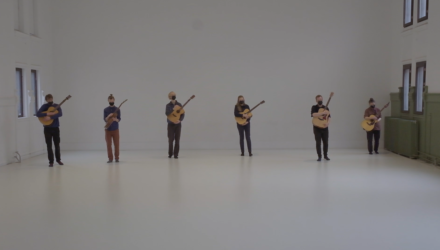 Fredrik Rasten’s Six Moving Guitars is presented by his own ensemble on acoustic guitars and is filmed by Jenny Berger Myhre especially for Louth Contemporary Music Society’s We Sing for the Future Festival. In Six Moving Guitars, the stable sounds of justly tuned consonances are being «activated» by the different qualities of the movements of the guitars. The piece came out of the collaborative work between three dancers and three musicians. The group’s goal was to work with choreography and sound as a unity, erasing the functional differences between dancer and musician and focusing solely on the sonic output of moving or spatially situated sound sources.

Six Moving Guitars is the result of one of the pathways that the group followed. The piece comprises an integrated whole of sound and movement, where all the six performers become moving guitar players and where the moving of the guitars is always instrumental to its specific spatial and sounding effect.

The music and the movements tied to the specific playing techniques and sounds are composed by Rasten, whereas the overall choreographic form is created through a process of playing and investigating the material collectively in a room. The piece can also be seen as a study in how people, without necessarily being trained musicians, can act together in a musical situation based on awareness of listening and spatial orientation. It is fascinating and beautiful to watch.

Louth Contemporary Music Society’s We Sing for the Future is funded by the Arts Council, financially supported by Create Louth and the Ernst von Siemens Music Foundation.This video production is also supported by Norsk Komponistforening and Norsk Jazzforum