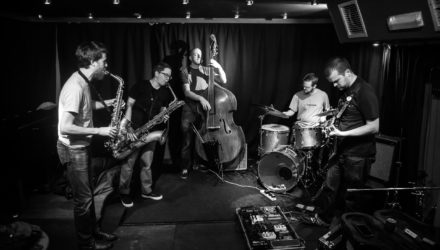 The first night of the Sloth Racket ‘A Glorious Monster’ Tour and we’re at Hundred Years Gallery with the excellent Colin Webster/Andrew Lisle duo. Join us as we celebrate the release of our third studio album!
SLOTH RACKET
Sloth Racket is a band of UK improvisers led by baritone saxophonist Cath Roberts, with Sam Andreae on alto saxophone, Anton Hunter on guitar, Seth Bennett on bass and Johnny Hunter on drums. They play Cath’s compositions, combining written fragments with graphic notation to explore the balance between freedom and structure. The results are always different, and so far have ranged across musical territories taking in fiery free jazz, minimal improv textures and heavy riffs. They release their third studio album ‘A Glorious Monster’ on the Luminous label this June.

‘The group’s ability to move freely from jointly articulated statements to darkly atmospheric extended techniques is remarkable.’ – The Wire
slothracket.co.uk

COLIN WEBSTER/ANDREW LISLE
The London based sax and drums pairing of Colin Webster and Andrew Lisle are quickly establishing themselves on the European avant garde scene, both as a duo and working with a broad range of collaborators including Dirk Serries and John Dikeman. Their debut album as a duo, ‘Firehouse Tapes’ was released on in 2015, followed by ‘Void Into Shape’, and ‘Live at De Singer’ in 2017.
webstology.wordpress.com