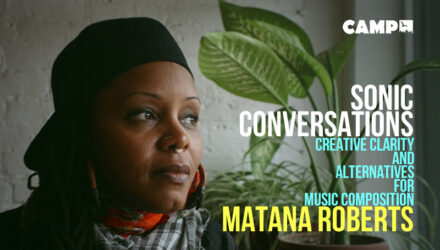 Matana Roberts has been called “a major talent” (The Wire) and “the spokeswoman for a new, politically conscious and refractory Jazz scene” (Jazzthetik). Their Coin Coin work has been widely and highly praised for its stylistic innovations and narrative power. A self-taught mixed media composer, the Chicago-born composer earned two degrees in performance from a smattering of American institutions but received their primary training from free arts programs in the American Public School System.

Matana is a past member of the Black Rock Coalition (BRC) and The Association for the Advancement of Creative Musicians (AACM). They have been a Van Lier Fellow, a Brecht Forum Fellow, a Copeland Fellow, a Jerome fellow, an ICASP fellow, an FCA awardee, and an Alpert Award In The Arts winner; they’re also a recipient of the Doris Duke Impact Award and the Doris Duke Artist Award.

Matana was resident at the Whitney in 2015, and exhibited in 2018 at the Fridman Gallery (NYC) and Bergen Kunsthall. In 2015 she collaborated with the filmmaker Laura Hanna on a film short entitled CODE: Stop & Frisk – this work developed into a series of events throughout 2016 supporting the families of victims of police brutality. This path developed further into her 2017 mixed media work “breathe”, for a 32 piece chorus.

These sessions will revolve around the tools that composer, sound artist and saxophonist Matana finds useful when exploring and creating alternative types of music composition. Self care, outside-the-box thinking, and community will mark the cornerstones of the week. Through this process, by the end of the 5 sessions we will collectively create an alternative group composition that each participant can then experiment with further in their own sonic community.