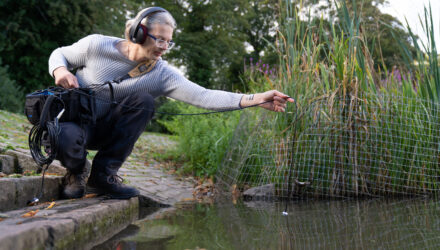 Ponds are scattered throughout our landscape. As well as being widely accessible in urban environments, they are a key feature of many Wildlife Trust nature reserves. As Spring arrives, these spaces become alive with the sounds of frogs, birds and insects. But did you know that some of the noisiest creatures live beneath the pond surface?

David de la Haye sits on the bank of a pond and listens. By using a hydrophone (an underwater microphone) he tunes into the sounds of amphibians, invertebrates, fish and even plants! Human ears aren’t adapted to listening underwater but this technology allows us to reveal incredible hidden soundscapes.

By offering audiences the chance to listen from an aquatic perspective he hopes to raise the cultural value of these overlooked spaces. Two-thirds of Britain’s freshwater plants and animals are found near small ponds, including some of the most threatened. And since 1970, there has been an 84% collapse of freshwater species.

On the 21st and 22nd February, you have the chance to listen for yourself. Become a citizen scientist by contributing your own audio recordings for acoustic ecology research. Also experience a unique sound installation, curated by members of the Wildlife Sound Recording Society, that explores the soundscapes of Wildlife Trust sites in the North of England.