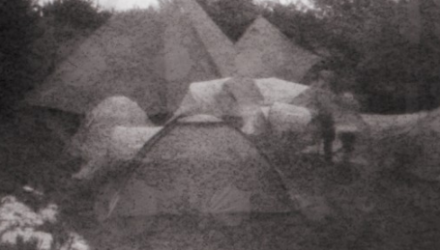 Sleep out in the inner city on International Dawn Chorus Day at one of the world’s first urban ecology parks, and explore the sounds of the Rotherhithe peninsula.

Listen to the Reveil radio broadcast in our soundtents. Reveil circles the earth at daybreak on live audio feeds transmitted by a community of DIY broadcasters around the world using phones, laptops and Raspberry Pi’s. Reveil is coordinated from the SHED and goes out on Resonance Extra and participating stations.

Artists Kate Carr and Lisa Hall lead workshops and performances working with sounds of Spring in the air and water, while Rebeka Clark and Mike Fray lead walks exploring the flora and insects of the Park. John Lely will perform ‘harmonica High’ and Maria Papadomanolaki will coordinate a series of remote performances with Weather Report (S Korea), The Radius (Chicago), Octopus Collective (S Walney Island), Wave Farm (Acra, NY) and others. Chris Wood will compose with satellite time signatures. SoundCamp will present work from a year’s residency researching 30 years of urban ecology at Stave Hill, since its creation on rubble infill in 1986.

Food throughout the weekend by Leon Lewis, coffee from Dungaree Coffee, cakes and juices from The Dancing Baker, bar on Saturday night, breakfast on Sunday morning.