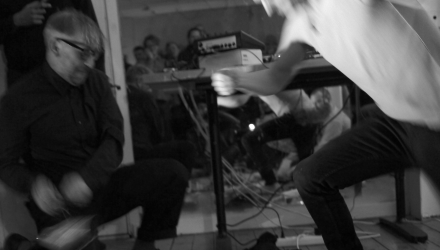 Dirty Electronics.
John Richards explores the idea of Dirty Electronics that focuses on shared experiences, ritual, gesture, touch and social interaction* Violations III is an extended event that includes the construction of a specially commissioned Dirty Electronics printed circuit board artwork/sound object, rehearsal and a large-group performance. A feedback system is designed where audio of a sequenced pattern is used to re-program itself.
www.dirtyelectronics.org

Max Wainwright.
Max Wainwright is concerned with states of flux and how useless or broken objects can be sounded. He likes to engage audiences in conversation, creating instruments, trading, donating or receiving objects, and performing on the objects, or simply watching and listening.

Claude Heiland-Allen.
is an artist from London interested in the complex emergent behaviour of simple systems, unusual geometries, and mathematical aesthetics. Since 2012 he has been
developing ‘clive’, his own DIY software for live-coding audio DSP in the C programming language. Some aspects model idealized physical systems, others are purely digital in origin, with parts inspired by other systems like Pure-data and SuperCollider3.
https://mathr.co.uk/