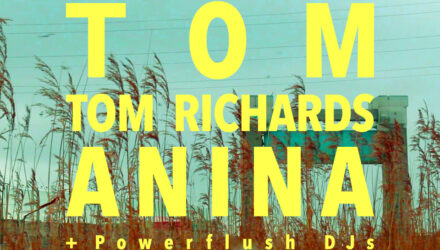 A genre-defying journey through electronic music, drawing from the experimental, the eclectic and the adventurous. Raw DYI sonic creations, tranquil ambient textures and thick noise walls alternate to create an experience on the intersection between contemporary popular culture and more experimental approaches to electronic music.

Tom
Tom is a new music project from Tom Hirst. This will be the first performance for the project and will feature improvised electronic music made with a sampler and home-made synthesiser. Tom has previously released and performed music internationally, primarily as Design A Wave.

Tom Richards
Tom Richards is an artist, musician, DJ, researcher and instrument designer working in London UK. He has walked the line between sonic art, sculpture and music since graduating with an MA in Fine Art from Chelsea College of Art in 2004. Richards has built his own idiosyncratic modular electronic music system, with which he creates slowly evolving and heavily textured polyrhythmic improvisations. His individual approach and reductive palette lead to a taut, rhythmically focused sonic experience. He has performed and exhibited widely in the UK, as well as internationally in the US, Germany, Peru, Japan and Sweden. Selected works and live performances have taken place at Tate Britain, The Queen Elizabeth Hall, The Science Museum, Spike Island, Cafe Oto, MK Gallery, Bold Tendencies, and Camden Arts Centre.
https://www.nonclassical.co.uk/tom-richards

Anina
Anina hacks, builds, and brings a set-up of electronic toys to scatter and manipulate; tape recorders, ping pong bottles, step sequencers, self-built oscillating circuits in cigar boxes and other electro punk creations whose invisible energies are played with a wave of the hand. She takes oldschool gadgetry to expand with interactive technology creating new sound objects and electronic instruments. Sounds and noises are generated and captured live, processed in real-time with the computer.
https://aninahug.ch