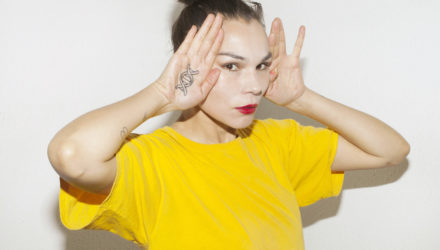 No one on this planet sounds like Aïsha Devi. Her voice is her most powerful tool in a repertoire that includes thumping beats and rave stabs, seraphic and guttural throat singing, mystical linguistics and corporeal sonics. Her music is spiritual and her live shows are transcendent experiences. She is a rebel and a radical alchemist who is breaking down barriers and traversing dimensions with her art.

Born by the Swiss alps with Nepalese-Tibetan heritage, a transversal of cultural and spiritual identity was forged, guiding both her personal and creative process as a nonconformed seeker. Devi applies meditation techniques in her approach to production and performance, channelling metaphysical research, ritualistic practice and healing frequencies into an alternate club paradigm. Dislocating pop culture, also evident in her mixes for NTS, FACT, and Mixmag, is one of her foundational tools and stylistic signatures.

In 2013 Devi co-founded Danse Noire, a label collective supporting insurrectional club music from around the world, releasing her breakout single ‘Aura 4 Everyone’ followed by ‘Hakken Dub / Throat Dub’ in 2014. In 2015 Houndstooth released Aïsha Devi’s debut album, ‘Of Matter And Spirit’, a significant sonic statement rich in political and philosophical subtext. Devi’s 2018 sophomore album, ‘DNA Feelings’, is her most accomplished statement to date, addressing how music can alter the fundamental vibrations of our material world and fibre of our being. She collaborated with Chinese visual artist Tianzhuo Chen on videos featuring profane and sacred iconography,