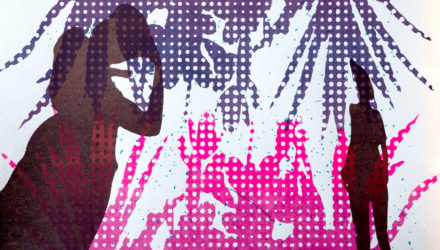 This event presents with a concert the last project by Unpredictable Series, a new album produced by Blanca Regina and Steve Beresford, Spontaneous Music: Duets with Blanca Regina

Duos include musicians Sharon Gal, Hyelim Kim, John Butcher, Benedict Taylor, Steve Beresford, Aneek Thapar, Wade Matthews, Matthias Kispert, and Jack Goldstein. Plus a short film by Pierre Bouvier Patron of the project. Visuals in the evening will be by Pierre Bouvier Patron and Blanca Regina.‘Spontaneous Music: Duets with Blanca Regina’ was recorded on Saturday, August 11 in a studio in Hackney, East London, with sound recordist and musician Syd Kemp.
Drawing on the strong tradition of free improvisation (spontaneous music) which London is renowned for throughout the world, Blanca recorded short duets with each of the musicians. The players chosen are skilled and experienced, but with very different approaches. Her presence on each track will give the resulting recording a unity, and everything recorded in one day. The musicians are Leafcutter John, Terry Day, John Butcher, Benedict Taylor, Matthias Kispert, Aneek Thapar, Steve Beresford, Sharon Gal, and Hyelim Kim. The album has been mixed and mastered by Dave Hunt. Blanca Regina is an artist, curator, and tutor based in London who is currently involved in creating audiovisual performances, sound works, multimedia installations, photography and book arts. Blanca has built up strong musical relationships with a variety of musicians since she moved to London in 2011. The vibrancy of the music scene in the city was a major attraction.