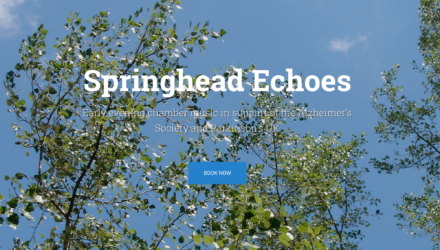 Early evening chamber music in support of the Alzheimer’s Society and Parkinson’s UK. The concert is in honour of Rosalind Richards and Brian Richards.

Mandy Burvill and the Fitzwilliam Quartet (www.fitzwilliamquartet.com) perform Mozart’s Clarinet Quintet, and give the premieres of two pieces by Ian Stephens (www.ianstephens.net), Springhead Echoes for string quartet, and Clarinet Quintet. Both are available from Composers Edition (www.composersedition.com).

Ian’s music has been performed by ensembles including the Brodsky Quartet, Choir of King’s College Cambridge, Royal Liverpool Philharmonic Orchestra, Salisbury Cathedral Choir, and Brighouse and Rastrick Brass Band, and broadcast on BBC Radio 3; his music was described in the 2013 BBC Proms Guide in the following terms: “Stephens’ musical language is hallmarked by strong thematic ideas and driven by the power of bold rhythmic motifs and sonorous combinations of instruments or voices.”

Mandy Burvill has made a number of concerto appearances with orchestras including Manchester Camerata and Royal Liverpool Philharmonic Orchestra. She was also the winner of the Britten-Pears Concerto Competition and performed the Mozart Concerto at the opening of the Snape Proms.