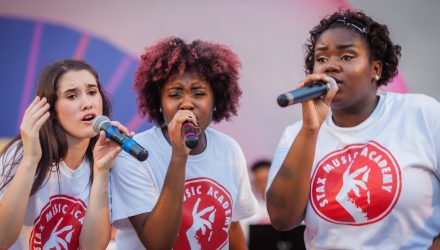 Imagine you are a teenager living at or below the poverty line in Memphis, Tennessee, where approximately one-fourth of all students drop out of high school before graduation and where nearly 50 percent of all children under 18 years old live in poverty.

Located in one of the most economically depressed zip codes in the United States, Stax Music Academy (SMA) has for more than 16 years had tremendous success with preparing students like these for college and success as adults by mentoring them with intensive music education as the primary tool. And not just any music, but the music of Stax Records, which once stood on the ;very site SMA stands today. Stax gave hope and opportunity to young people like Isaac Hayes, Otis Redding, Booker T. & the MGs, Carla Thomas, Eddie Floyd, and dozens of others to succeed in life.

In 1967, Stax Records sent its top artists on the label’s first-ever Stax/Volt European tour and those artists’ lives and the lives of the audiences were changed forever. As 2017 marks the 50th anniversary of that tour, the Stax Music Academy will celebrate by sending its top students on a tour of the UK, France and Ireland, performing the same set list of the original tour with Otis Redding, Sam & Dave, Eddie Floyd, Carla Thomas, Arthur Conley, and Booker T. & the MGs.