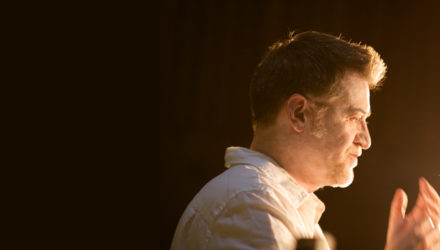 Steve Boyland & Merseyside Improviser’s Orchestra: For Some Time, Nothing

For Some Time, Nothing is a sequence of improvised compositions created by international voice artist Steve Boyland and Merseyside Improvisers Orchestra in response to the poetry of Sean Borodale.

These poetic fragments, written live and on-site by the poet as part of an ongoing project started in 2004, were retrieved and curated during the Lyrigraph Sessions, an intensive period of creative discourse enacted between poet and vocalist during 2017-18.

The fragments were subsequently edited for performance by Boyland and given the title For Some Time, Nothing, a line taken from that edit which captures the metaphysical, almost Beckettian flavour of its dramatico- poetic landscape.

The work was premiered in a staged ‘reading’ with Borodale at the Bluecoat, Liverpool in March, 2018. This collaboration between Steve Boyland and members of MIO represents a unique opportunity to further extend and explore the processes of retrieval and re-authorship at the heart of the lyrigraph project and to reconfigure the texts within the broader possibilities of an improvised abstract soundscape.