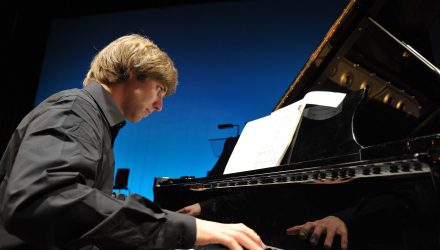 A former Professor of Music at the University of Sussex, Jonathan Harvey wrote a book on Karlheinz Stockhausen, whose music was a strong influence. In ‘Tombeau de Messiaen’, Harvey explores the ‘colours of the harmonic series and its distortions’, paying tribute to another great 20th century composer, Olivier Messiaen.

This concert also presents a rare opportunity to hear Mantra by Stockhausen. This composition was composed in 1970 for the Kontarsky brothers at Donaueschingen. It is scored for two ring-modulated pianos; each player has a chromatic set of crotales, a wood block and one player uses a recording of morse code.

Joseph Houston is a pianist based in London and Berlin. His wide-ranging curiosity has led to activity in a variety of fields, particularly in contemporary and experimental music. He has performed all over Europe and in China, and his playing has been broadcast on BBC Radio 3, BBC Radio 4, and Albanian national television.

Alex Wilson studied at York University and Andrew Ball at the Royal College of Music. As a concert pianist he has performed around the country, in venues including Wigmore Hall, Queen Elizabeth Hall and Cadogan Hall, and has performed in France, Spain and at the Rachmaninov Hall, Moscow.

The Stockhausen Festival is co-curated by ACCA and the Department of Music, University of Sussex.